Hatfield is a small town 11 miles South of Mena on U. S. Highway 71, in Polk County, AR.  Hatfield was founded as the railroad came in 1896.  Arthur E. Stilwell founded the Kansas City, Pittsburg and Gulf Railroad, now the Kansas City Southern (KCS).

Stilwell founded Mena and other towns along his railroad, naming them for investors, employees, and friends. Hatfield began as Clayton Spur, which was founded before the Civil War, but was renamed after Sam Hatfield, a railroad worker killed in a blasting accident.

Old Holly Springs Road, now County Road #74 from Highway 71 North of Mena, just past Duke's Junktion.  When the 911 addresses were made, the road number changes to #184 about 1/2 way down the road.  The Old Holly Springs Cemetery (from the 1860's - 1870's) is located at about the spot where the road numbers change, in the Rodney Bowen field.  There used to be a little church in this same area. 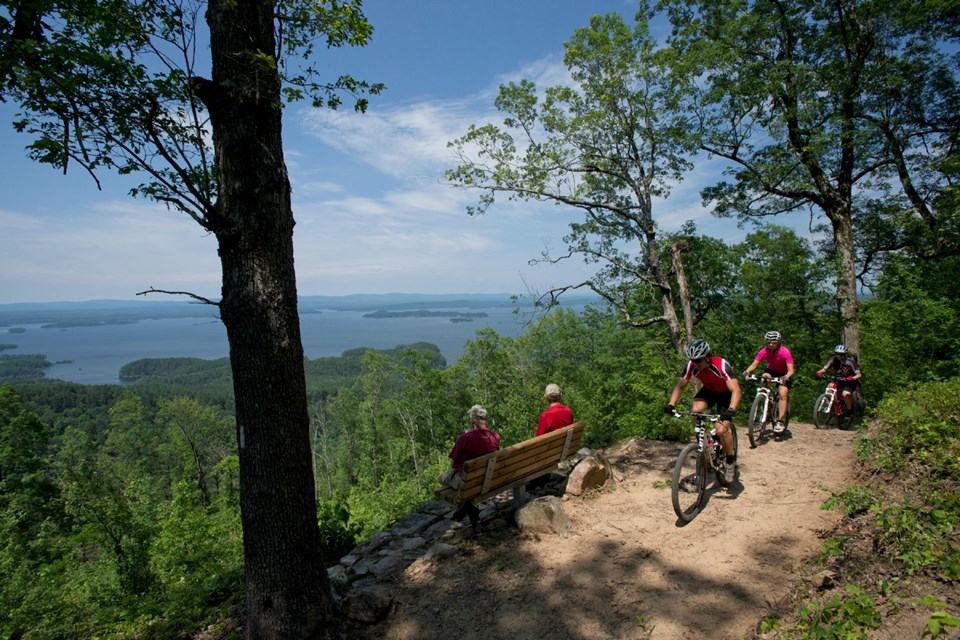 The Quido post office was where the Argle Cole home is located, and at one time Holly Springs Road was a Federal Road.

Back years ago, about a third of the residents were family, and the rest all knew each other and were like family.  Different preachers would come in and preach at the old church house, some riding horses in.  There were few vehicles on the road besides the mail and school bus.

Holly Springs got its name for the holly trees at the spring near Rodney Bowen's barn.

Vandervoort was a key stop for the Kansas City, Pittsburg, and Gulf Railroad (later the Kansas City Southern). Francis Marion Cecil, with his wife Rhoda Lebow Cecil and thirteen children, owned and farmed the land in southern Polk County where Vandervoort now stands. When the town site was first laid out, it was known as Janssen, taking its name from the maiden name of Jan DeGeoijen's wife. Jan DeGeoijen was a Dutch coffee merchant who was involved in financing the construction of the railroad.

There was another town in Arkansas called Jansen, however, and mail between the two towns was constantly being mixed up. In 1907, the town’s name was changed to Vandervoort in honor of the mother of Jan DeGeoijen. (Vandervoort was DeGeoijen’s mother’s maiden name.) Arthur Stilwell, founder and builder of the railroad, named towns along the line after investors, co-workers, himself, and family members.

Stilwell and his crew purposely missed established towns while laying out the railroad, as their money came from land speculation, not rail traffic. For this reason, and because Vandervoort had a naturally marshy area adjacent to the planned route, the railroad built a large pond with a spillway, to be used by the steam trains. Vandervoort was also a good half-way point for the trains to take on water. Through service between Kansas City, Missouri, and Port Arthur, Texas, began after the last spike was driven near Beaumont, Texas, on September 11, 1897.

For a time in the early 1900s, Vandervoort had more than 550 people, and there were eight general stores, four hotels, a bank, doctors, drug stores, saloons, livery stables, planing mills, a cotton gin, blacksmiths’ shops, a telephone office, and an office of the justice of the peace. Cotton was the cash crop for many people, and there was also timber work and sawmilling. The main street of Vandervoort in the early days was Old Line Road, which, in 1923, became the Jefferson Highway. In 1941, Highway 71 was built, bypassing Vandervoort and going directly from the nearby town of Cove (Polk County) south to the town of Hatton (Polk County). Since then, the town of Vandervoort has steadily declined, and the population was down to 87 in 2010. 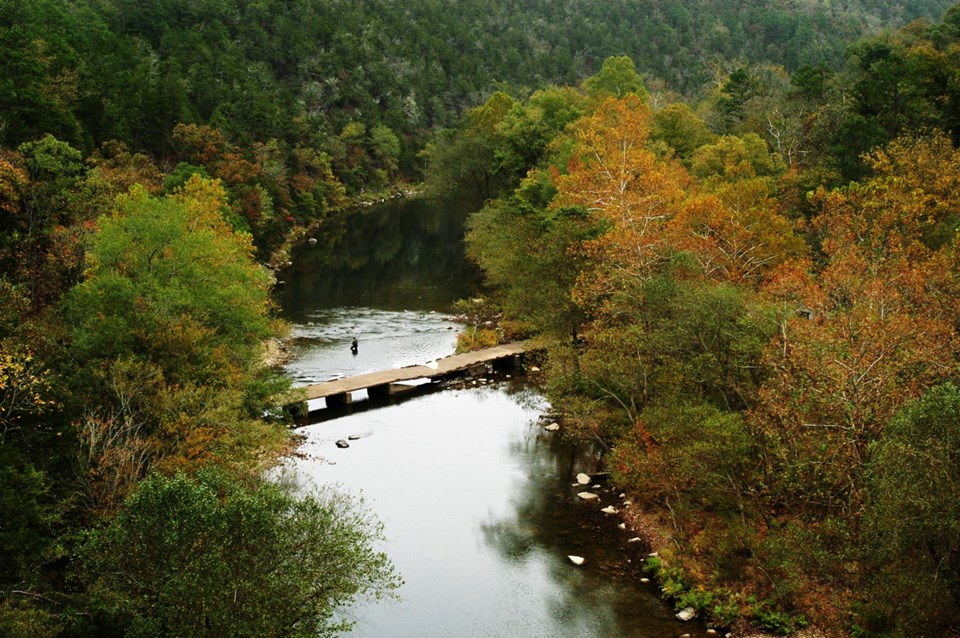 Ariel view of the Cossatot River near Wickes, AR

Leni Wignall Affholter taught the first subscription school classes in 1895, which were held in the upper story of the Pine Knot Hotel. The community organized the first public school in a frame building in 1896, with W. G. Fail as the first teacher. In 1931, the old frame school building was replaced by a stone building that was built with rocks from theCossatot River. Kittie L. Hughes was in the first graduating class in 1933, and she went on to teach forty-five years, the last twenty-eight of them at the Vandervoort School. Van-Cove Public Schools was formed in 1949 when Vandervoort and Cove consolidated. In the 2005-2006 school year, 409 students were enrolled in the school at Vandervoort.

Vandervoort has three churches: Methodist, First Baptist, and Gospel Lighthouse Pentecostal Church of God. The Methodist church was in use for more than 100 years, but since 2000, it has been used mainly for weddings and funerals.

Timber remains a major industry in the Vandervoort area. Vandervoort is home to the Watkins Trucking business, a post office, a restaurant, and a city hall/rural volunteer fire department. In the surrounding area, many families still operate chicken, hog, and cattle farms. There are numerous retired people. Every Fourth of July for more than 100 years, Vandervoort has had a three-day picnic on the grounds donated to the town by Francis Cecil in 1935. People come from miles around to visit, watch the games, dance, and see the fireworks.

Wickes is a small town in southern Polk County, along U. S. Highway 71 about 25 miles South of Mena, about 20 miles North of DeQueen.

The Cossatot River State Park Natural Area (link) is located between Arkansas #246 and U. S. Highway 278 near Wickes. It is the largest natural area in the state, and conserves a 12-1/2 mile stretch of the Cossatot River. The park/natural area is also home to two types of fish, the Ouachita Mountain shiner and the Leopard Darter--that are found only in streams in the Ouachita Mountains. Several rare plant species are found within the area's 5 major plant communities.

Wickes was built along the Kansas City Southern Railway (KCS) around the beginning of the twentieth century, Wickes is now dominated by the poultry industry. The 2010 census noted its population as more than fifty percent Hispanic.

Western Arkansas was heavily forested and sparsely populated until late in the nineteenth century, when the growth of railroads promoted the success of the timber industry. In the last decade of that century, Arthur E. Stilwell was head of the Kansas City, Pittsburg and Gulf Railroad (later the KCS).

His company created and acquired a network of railroads linking various locations in Missouri, Oklahoma (then still called Indian Territory), Arkansas, and eventually Texas and Louisiana. The company moved coal and other minerals, as well as lumber and passengers. Building tracks into western Arkansas, the company established the city of Mena—now the county seat of Polk County—as well as Hatfield (Polk County), Vandervoort (Polk County), and Wickes. All of these communities were named for family members, friends, or financial supporters of Stilwell and his company. Wickes was named for Thomas Wickes, a vice president of the Pullman Company, which built railroad cars. The post office established at Wickes in 1897 was briefly designated Sherwood, but the name Wickes was being used by the end of that year. 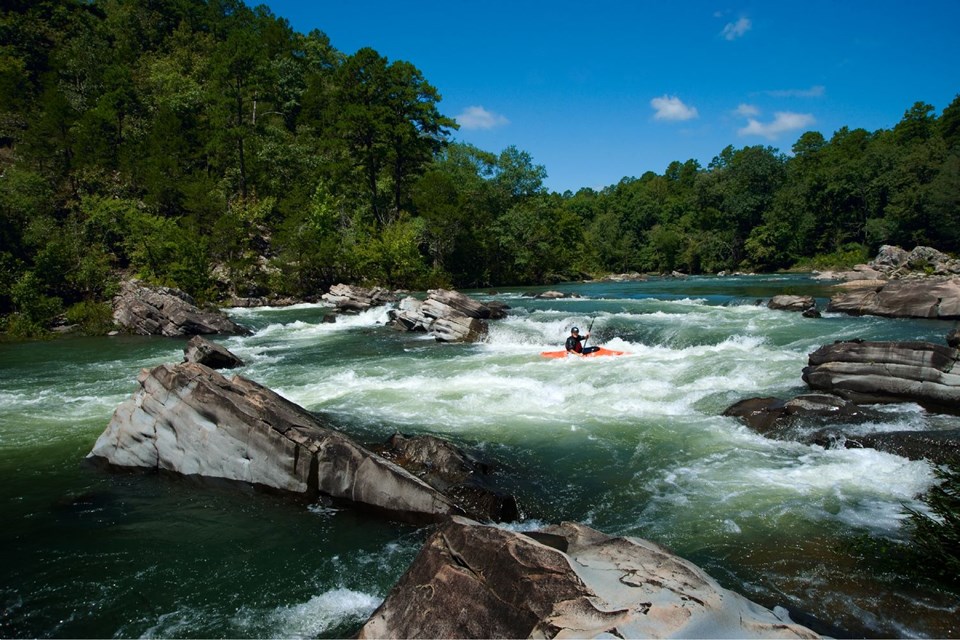 Kayaking in the Cossatot River near Wickes, AR

Some of the land on which Wickes was built was already owned by Daniel Lebow, who had acquired a patent to the land in 1884. James Forsee purchased a patent to most of the remaining land in 1897, although Richard Snow had bought land just south of what would become Wickes in 1890. Forsee represented the Arkansas Townsite Company, which had contracts with the railroad surveying crew. Although Wickes never became a relatively large city like Mena, it was a successful lumber town for much of the twentieth century.

Wickes incorporated as a second-class city in 1944, by which time the lumber industry was generally declining following the Depression and the diversion of much of the labor force into military activities. In the aftermath of World War II, however, the poultry industry began to expand in western Arkansas. Tyson Foods Inc., founded in Springdale (Washington and Benton counties) in 1935, has both a hatchery and a poultry processing plant in Wickes. The city also has some stores, several churches—including Nazarene, Pentecostal, and Baptist congregations—and a few restaurants. A Baptist camp, Boggs Springs, is located a few miles west of Wickes.

Wickes is also close to Cossatot River State Park-Natural Area. The park was established in 1987, after more than ten years of negotiations with the Weyerhaeuser Company, to preserve land along the Cossatot River. Additional land was added in 1990, and a visitor and education center was dedicated in 2004.

Little information exists about the early schools in Wickes, although children were undoubtedly being taught in the community soon after it was organized. The schools in twenty-first-century Wickes are part of the Cossatot River School District, including Wickes High School, which in 2013 had about 250 students, and Wickes Elementary School, with about 300 students. Rich Mountain Community College also maintains an off-campus site in Wickes.